You’re offline. This is a read only version of the page.

The QTIC board was established in 2001 and represents a range of sectors across the Queensland tourism and hospitality industry. With diverse backgrounds, our board members are equipped to provide expert guidance to QTIC and the tourism industry.


Shane developed a successful management career working in Brisbane and South Africa before returning to the family business as Managing Director of National Park Pty Limited, the family holding company of O’Reilly’s and Canungra Valley Vineyards Pty Ltd. His formal qualifications include a Business Degree in Human Resource Management and a Diploma of Company Directorship and a Diploma in Directorship of not-for-profit and Government-owned corporations. Shane’s current community and industry association representations include: Director Gold Coast Tourism 2002 to 2006 (membership based nomination), Director of the Queensland Wine Industry Association 2004 to 2008 (membership based nomination), Director of Gondwana Rainforests Reserves Australia 2005 to 2011 – World Heritage Area (Federal appointment), Chairman Australia’s Green Cauldron 2008 to 2010, Director Tourism Queensland 2006 to 2011 (State appointment), Chairman of Canungra Information and Historical Association, and Life member of Natural History Association which oversees the Green Mountains section of Lamington National Park. Under Shane’s guidance, the O’Reilly family business has grown from a domestic leisure based accommodation business with 41 rooms to the current 70 rooms in the main Retreat plus the development and subsequent management of 48 Mt Villas, a conference centre and Lost World Spa. The accommodation market is now split between domestic and international leisure as well as conferences. There has been a large investment in facilities for day visitors, including the off mountain development of Canungra Valley Vineyards situated at the bottom of the mountain road to O’Reilly’s. Shane is the father of two small children Grace and Sterling. Shane enjoys bike riding and in 2012 completed the Rockhampton to Brisbane charity ride for Chain Reaction in aid of the Starlight Foundation.


Mark Evans has been in the tourism industry for almost 30 years. In that time he and his family have brought Paronella Park from a forgotten attraction on a back road, to Queensland’s Number 1 must-do, winning multiple awards for both tourism and business. The business has now broadened to include the Mena Creek Hotel and Mamu Tropical Skywalk, creating a destination south of Cairns. Mark currently serves on the Board of Tourism Tropical North Queensland and on the Townsville Enterprise Limited Strategic Advisory Committee for Tourism. Mark is also an experienced Guest Speaker and has presented throughout Australia and overseas. He has also lead the business in overcoming adversity (2 Cyclones, GFC, COVID-19). Mark’s business success stems from the ability to innovate and embrace change. This is critical leading up to, and during, these critical times. Relationships and teamwork have been a key contributor to the success of his businesses, as it is in any venture. 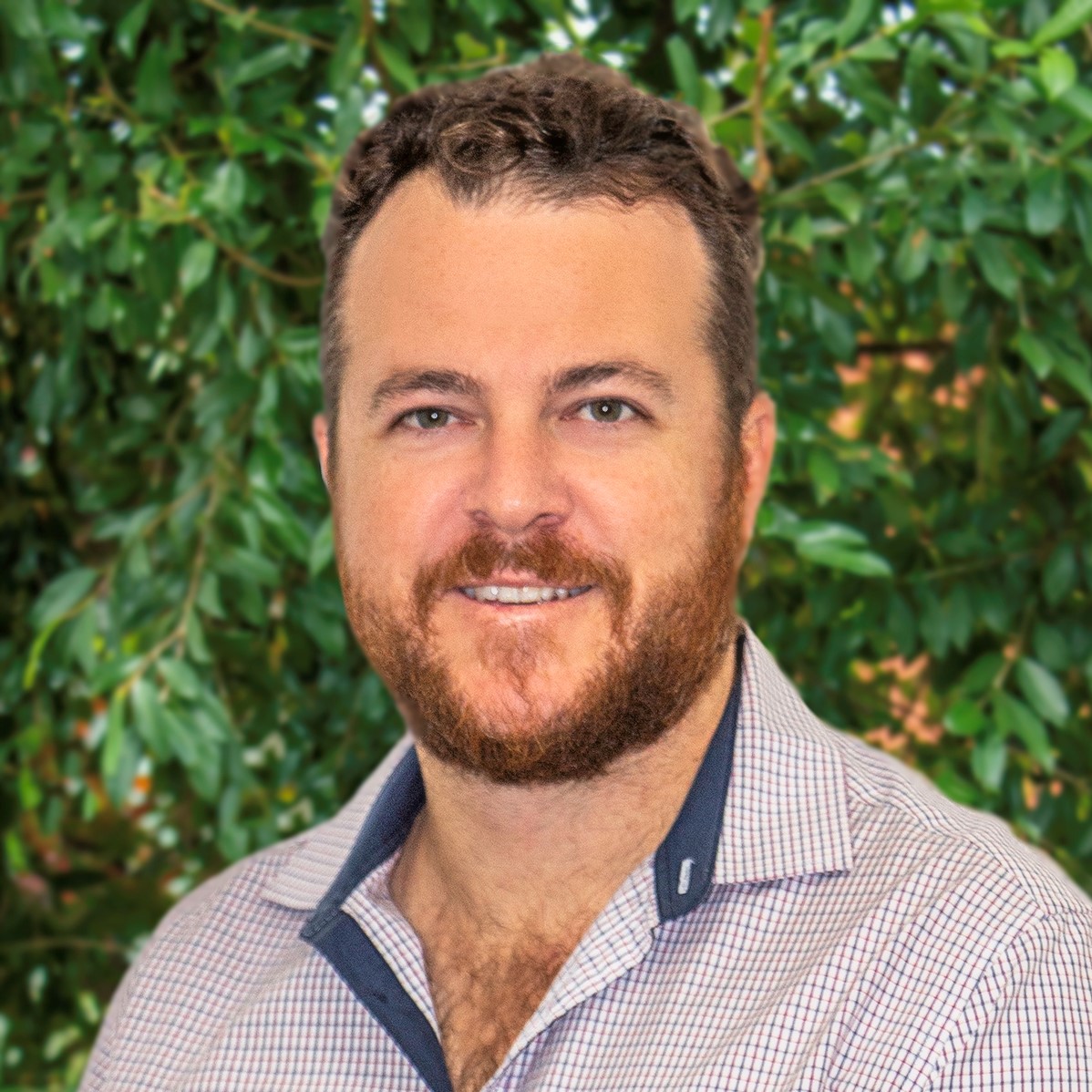 
Peter is the Managing Director of the CaPTA Group, which is owned by the Woodward family and operates tours and attractions in the Cairns and Port Douglas region. His family has operated tourism attractions in the region since 1976. The CaPTA Group comprises of the Australian Butterfly Sanctuary, Cairns ZOOM & Wildlife Dome, Rainforestation Nature Park, Tropic Wings Cairns Tours & Charters, Jungle Tours & Trekking, Wildlife Habitat, Wooroonooran Safaris, ABC Sales & Maintenance and Careers Training Centre. As part-owner and Managing Director of Respax - which is a software company that develops booking, manifesting and operational solutions for attractions and tour operators throughout Queensland, Australia and SE Asia, Peter has worked with tourism organisations of all sizes and appreciate the different operational challenges that different business’ experience. Peter is on the committee for Cairns Amateurs Racing on the Reef Carnival and has previously been a director of TTNQ from 2016 to 2020. After attending the University of Queensland and completing a Bachelor of Commerce (Finance) and a Bachelor of Science (Computer Science), Peter worked in the finance industry before moving back into Tourism.


Nick Ellis is a passionate and engaging hotelier serving the front line of the tourism industry for more than 20 years. He has built a reputation as an energetic, active and entrepreneurial thought leader with a passion for the development and growth of people, product excellence and experience innovation. A born and bred Queenslander, Nick has been fortunate enough to travel Australia building industry expertise across a wide range of hotels, including Peppers Noosa Resort & Villas and Brisbane’s apex boutique luxury lifestyle hotel, Ovolo Inchcolm. Nick also worked as General Manager for the pre-opening and global brand launch of Accor’s Tribe Hotels. In his current role as Innovation Manager for Spicers Retreats and Scenic Rim Trail, Nick focuses on creating innovative solutions to improve guest experience, as well as transforming business processes for the Queensland operated hotel and experience group. Alongside QTIC, Nick works with the Department of Tourism, Innovation and Sport as part of the Young Tourism Leaders program. This initiative couples inspiring tourism role models with school, TAFE and university students to showcase real-life examples of career opportunities in the tourism industry. Nick has been a part of the QTIC community since 2018. He is a key part of the Young Professionals Mentoring Program and has been a member of the judging panel for the Queensland Tourism Awards since 2020. 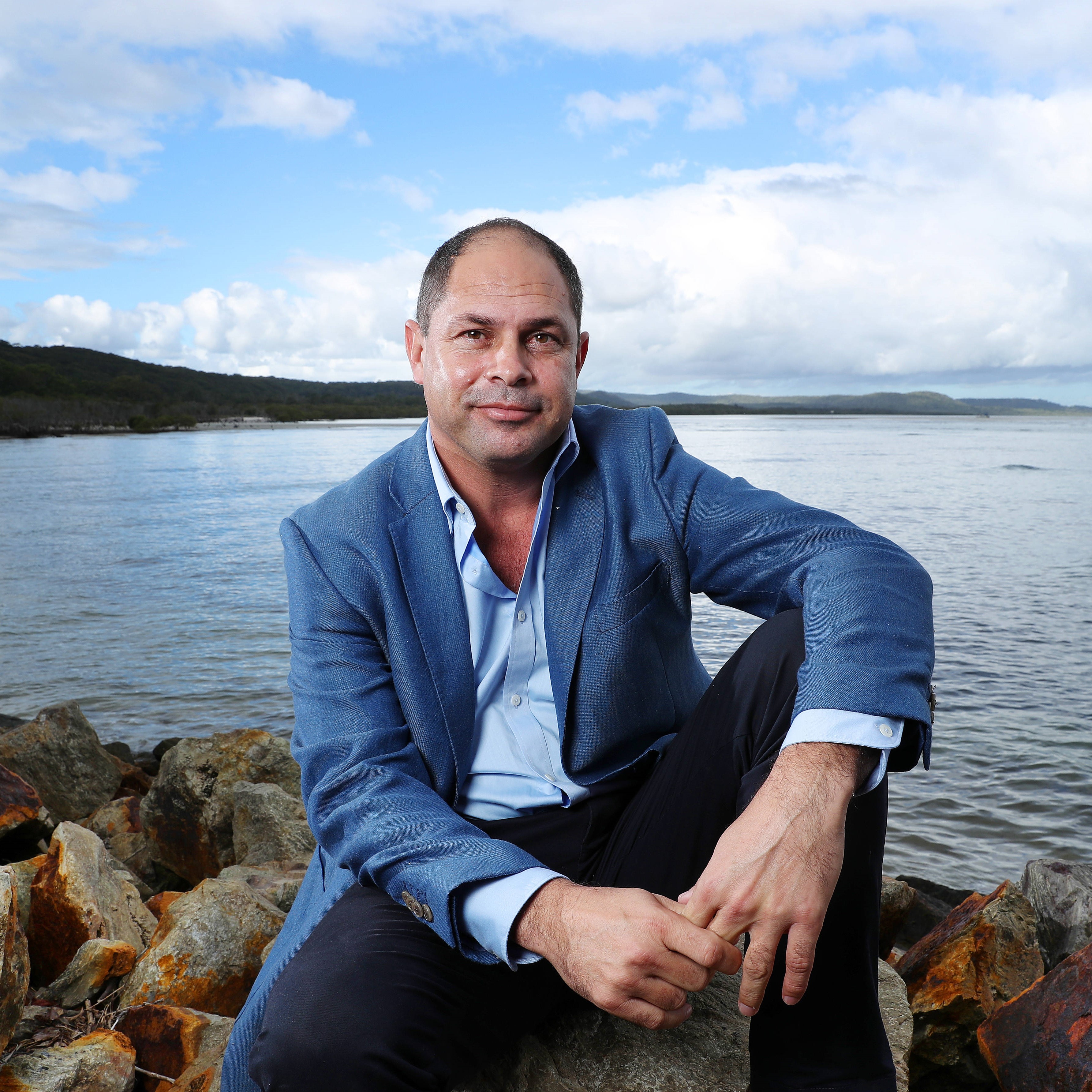 
Cameron is a Quandamooka man from Moreton Bay off the coast of Brisbane in South East Queensland. Cameron is a law graduate from the University of Queensland and holds a Bachelor of Arts in Leisure Management. He has worked previously in the legal industry and for more than 15 years in local and state governments delivering Indigenous policies and programs including the Backing Indigenous Arts Program and the Cairns Indigenous Art Fair. Cameron was formerly the CEO for the Quandamooka Yoolooburrabee Aboriginal Corporation – the Native Title Body and cultural heritage body for Moreton Bay including Minjerribah (North Stradbroke Island) that jointly manages the Naree Budjong Djarra (My Mother Earth) National Park, runs Quandamooka Coast Tourism experiences and the Quandamooka Festival. He is Chair of the QTIC Indigenous Working Group, member of the Queensland Koala Advisory Council, member of the Healthy Land & Water Indigenous Advisory Committee and a member of the Arts Queensland First Nations Arts and Cultural Panel. 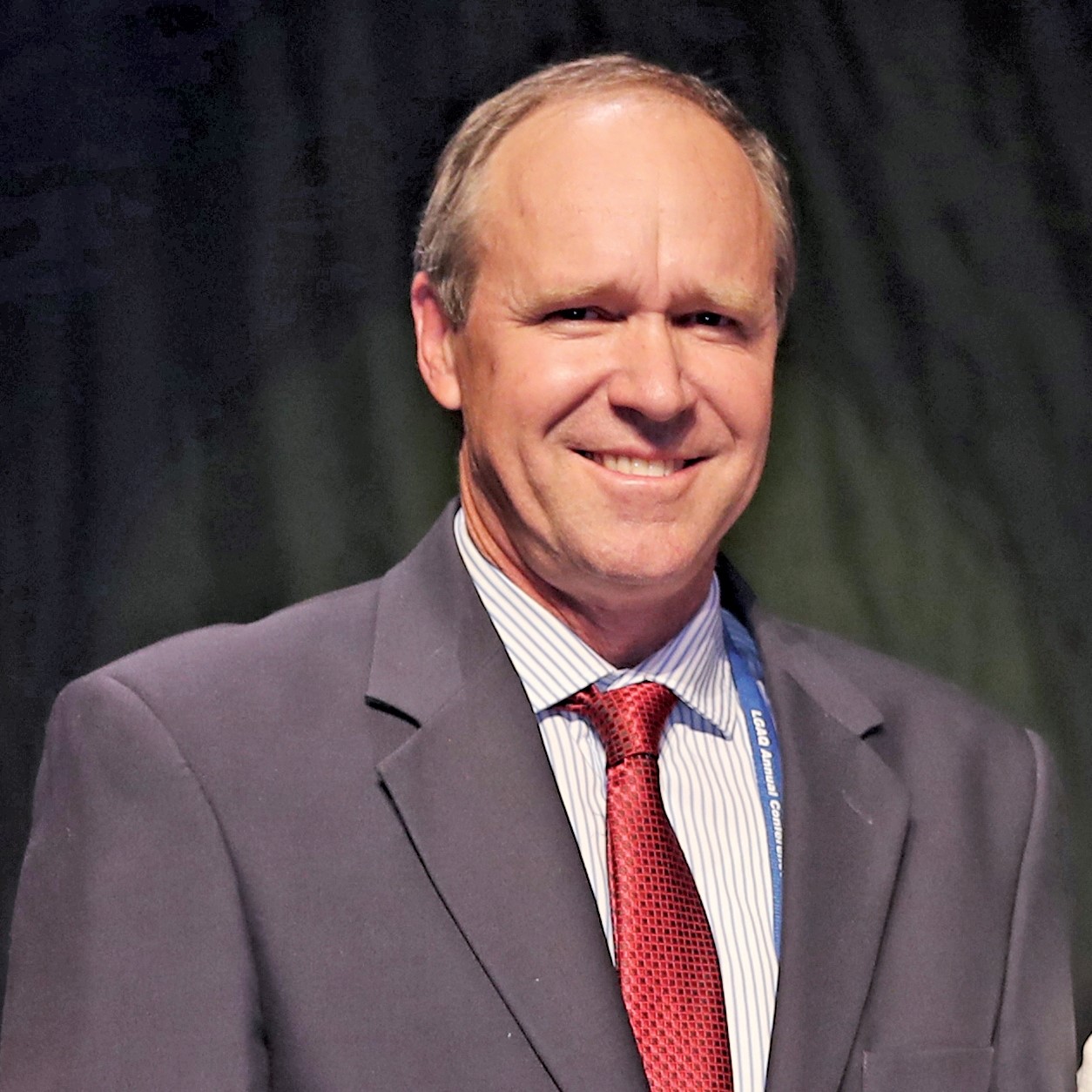 
Stuart is a pastoralist from the western area of Quilpie Shire. He is the owner and Manager of Plevna Downs, a grazing enterprise dealing in organic wool, sheep and beef. Stuart served as a Councillor on Quilpie Shire Council from 1997 to 2004, as Deputy Mayor from 2004 to 2008 and was elected Mayor in 2012. He is Chair of the Outback Queensland Tourism Association. In 2008 Stuart founded the non-profit, charitable public company Outback Gondwana Foundation Ltd. He is the Chair and a Director on the board. The company was set up to preserve the natural assets of the south west region and educate the public in relation to the amazing paleontological discoveries being made there. Stuart holds a Bachelor of Engineering Degree (QUT) and is married to wife Robyn and has two adult children. 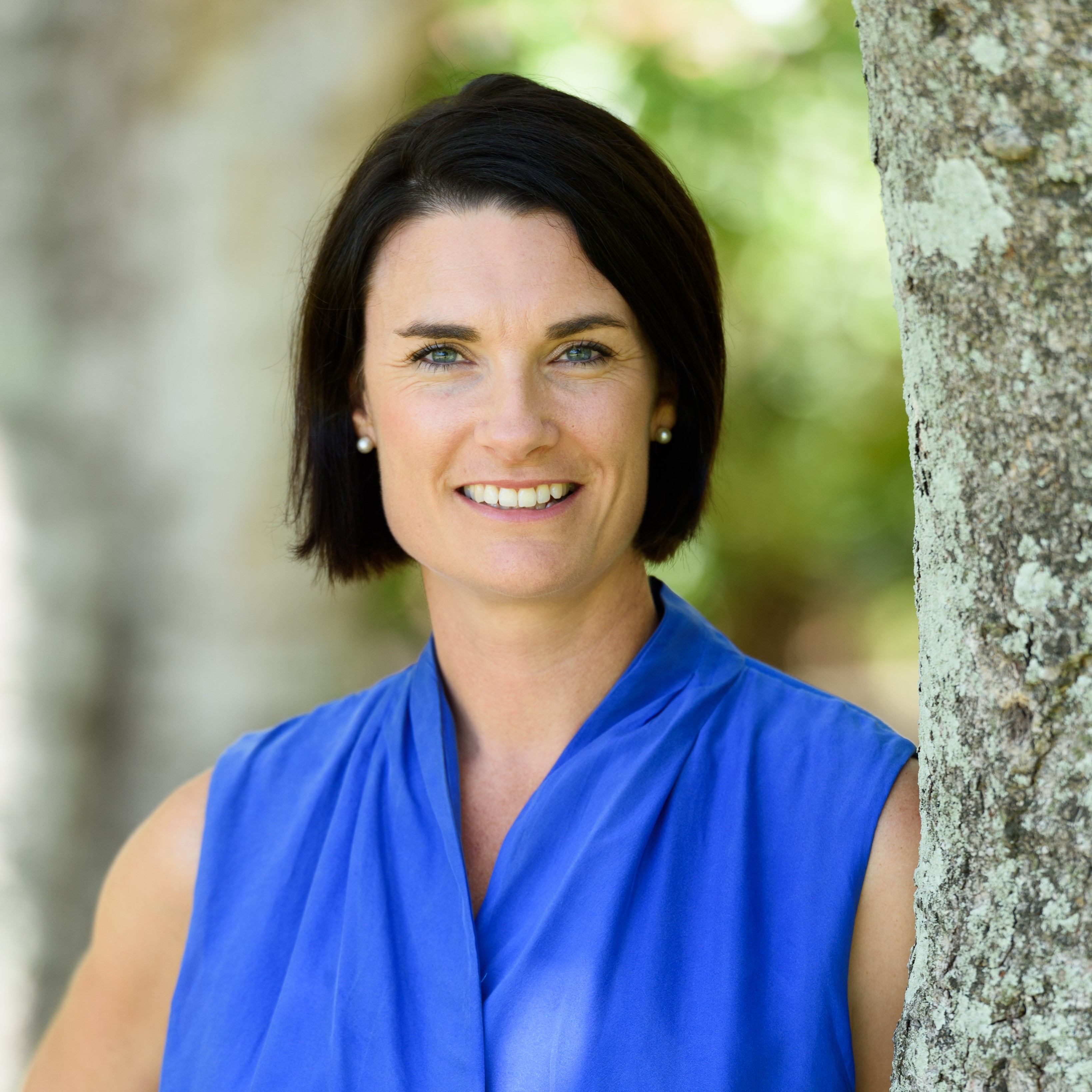 
Katherine is the Chief Executive Officer of Bundaberg Tourism and sits on the QTIC Board as a representative for the Queensland RTO Network. With a holistic understanding of regional tourism and business having been heavily involved in the destination development of the Town of 1770 - Agnes Water as President of the LTO, and owner, operator of eco-tourism business, 1770 LARC tours for 17 years. Winning numerous regional and state awards for Cultural and Heritage Tourism, Eco-tourism, Visitor Attraction and the CQ and Southern Great Barrier Reef Tourism Champion Award for outstanding contribution to the tourism industry. On behalf of the RTO Network, Katherine has been involved in the development of the Climate Change tourism adaptation and mitigation strategy and the Nature-based tourism strategy. An active member of the regional community in Bundaberg, Katherine is a part of the Reducing Urban Glow in Bundaberg project. This long-term project supports the broad effort to conserve the largest concentration of nesting marine turtles on the east coast of Australia using smart technology and open data. As well as an active lead on product and experience development initiatives across the destination, encompassing the Southern Great Barrier Reef, culinary tourism and indigenous experiences. Being recognised in the region as a collaborative leader, Katherine has forged strong partnerships across industries and has raised the reputation and awareness of the value of tourism and the contribution the industry brings to the regional economy. 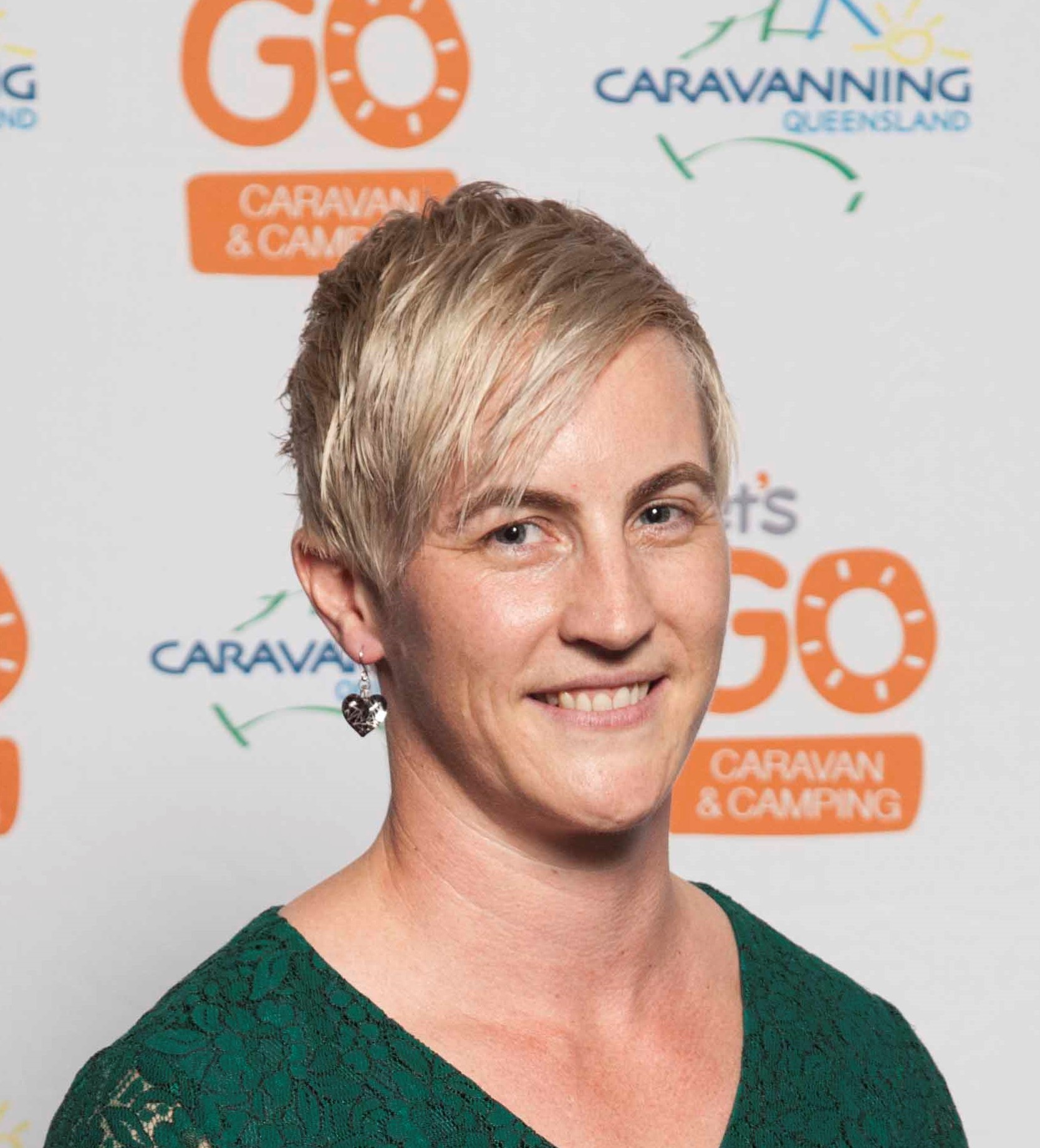 
With over thirteen years’ experience in national and state caravanning industry associations, most recently as Chief Executive Officer of Caravan Parks Association of Queensland (CPAQ), Michelle has a strong knowledge of the issues that face industry associations, especially during these challenging times. With a highly engaged membership base made up, primarily, of small operators, located right across Queensland, Michelle can clearly articulate the issues facing these businesses, and actively advocates for whole of tourism programs which will support these operators. Her role regularly takes her out in the regions talking directly to industry businesses under CPAQ’s Divisional structure. As well as being an active participant of the QTIC Associations Council for over four years, Michelle has stepped in to Chair meetings when Laura Younger is unavailable. Through meeting participation and by developing relationships with other participants, she understands the importance of this group to overall QTIC policy discussions, and the benefit of ensuring a strong, united voice from this group to the QTIC Board. Michelle will bring a strong regional perspective to the QTIC Board providing a voice for small tourism businesses across the state with her understanding of governance, finance and associations operating under a federated structure.


Elsa Dalessio is an experienced Senior Leader with significant leadership, commercial, operational and logistics experience in the aviation tourism and transport industry with a successful track record as a business leader, and commitment to excellence. She has had a successful career at Qantas most recently Regional General Manager QLD / NT, prior to that as Executive General Manager Commercial Qantas Regional Airlines and CEO Sunstate Airlines. With an unblemished track record and an unrelenting focus on results, Elsa was the first female and youngest CEO equivalent of a Qantas Group airline, leading one of the most profitable airlines at the time and achieving outstanding operational results. She recently joined Brisbane Racing Club as General Manager Marketing, Memberships and Strategic Partnerships and started her own Tourism and Aviation Strategy consulting business. Elsa has also held Board and Committee roles as follows - Premier of Queensland Business Advisory Council Member; Queensland Futures Institute Corporate Council Member; Lord Mayor of Brisbane, Business Advisory Council Member and Olympic Games QLD Fundraising Advisory Committee Member and Qantas Founders Museum Board Member.